On weekdays I go to an office a few miles west of Lincoln where I do “work” in exchange for “pay”. My job involves using a computer, so I use a keyboard. I do not think this is unreasonable.

Recently my keyboard had started to become displeasing to use. The return key worked around 85% of the time which, it turns out, is the precise point at which it becomes extremely frustrating to use, but is still not faulty enough to warrant complaining about it to other people in the office. In addition to this, the space bar (which sounds far more exotic than it really is) had become disappointingly wonky.

Here is a photograph of my keyboard:

It was made by a company called “Kensington”. I know this because their name is printed at the top-right of the keyboard: 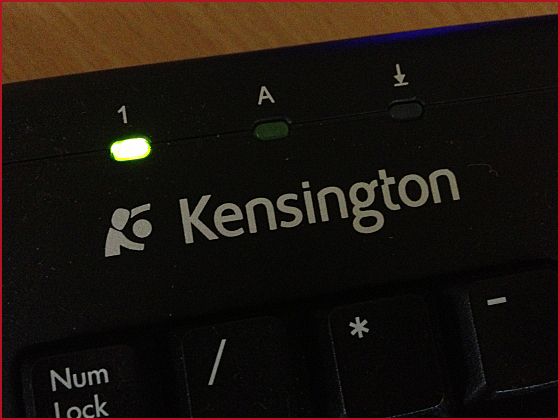 According to their website “Kensington computer accessories bring practicality, creativity and inspiration together in a comprehensive line of products that delight users and create lifelong customers.”

Frankly, this just adds insult to injury. Anyone “delighted” with a wonky space bar needs their head examining.

I decided to swap my keyboard with another. I looked around the office and settled on this little beauty:

This keyboard was made by Dell. It is 44cm wide, a whole 2cm shorter than its Kensington predecessor. That’s almost 5%! Just think what I could do with that extra space!

Unfortunately, it is also 16cm deep, to the Kensington’s 15cm, which only results in a 2% reduction in surface area.

But there must be a good reason for this increase in depth, right? Well, no. My investigations show that the only thing they seem to have done with the extra space is have their logo at the bottom – not the top! The bottom! Look! 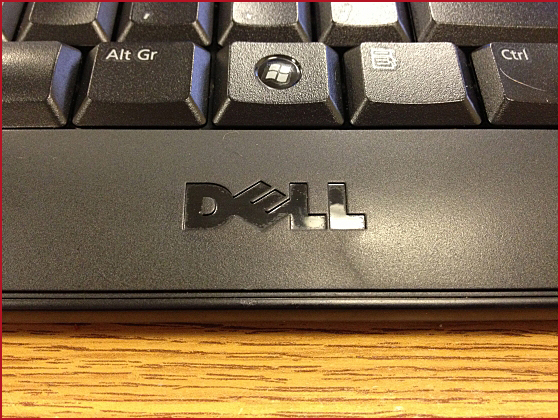 I mean, yeah, it’s nice to have it recessed into the plastic like that, but why there? They could have put it at the top. Look, there’s a perfect space for it by the Num- / Caps- / Scroll-lock indicator LEDs: 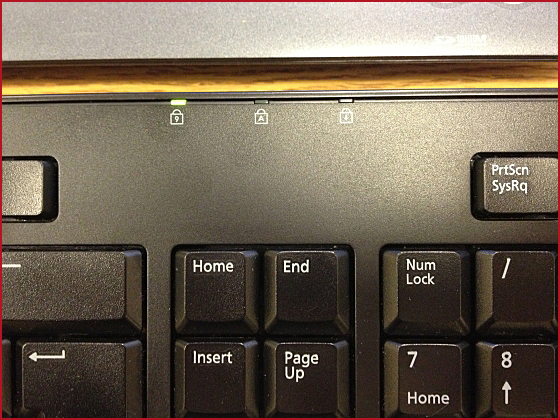 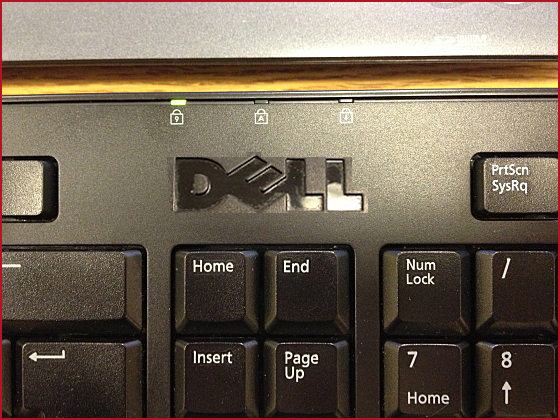 This isn’t the only part of the design they’ve had to change though. If we refer back to the decrease in width (44cm down from the Kensington’s 46cm), we now have to start asking questions about how they have achieved this reduction. You can’t just magically zap 2cm into thin air. I know; I’ve tried.

As far as I can tell with my layman’s eyes, Dell’s designers have made two adjustments to traditional keyboard design. The first is to rotate the cluster of navigation keys (you know; “Home”, “Pg Up” (technical speak for “Page Up”; literally “move up the page”), “Insert” and that). This is how they look on my colleague’s keyboard made by Microsoft (who know a thing or two about keyboards):

This is how they look on the Dell: 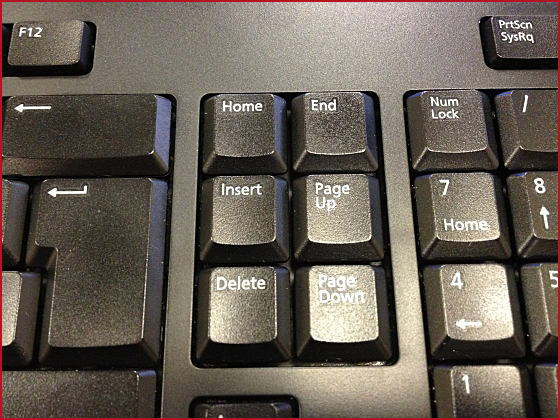 Weird, eh? Initially I was sceptical – how would my fingers cope with this change? – but having used the keyboard for a while, I have concluded that this arrangement is perfectly serviceable. I occasionally have to look down to check if I’m pressing Home or End, but to be honest I used to have to do that anyway. I don’t have a degree in typing.

The next concession Dell have made in their quest for narrower peripherals is to make the left – but not the right – Alt & Windows keys narrower than they would normally be. On the Microsoft keyboard they are around 20% wider than a standard letter key: 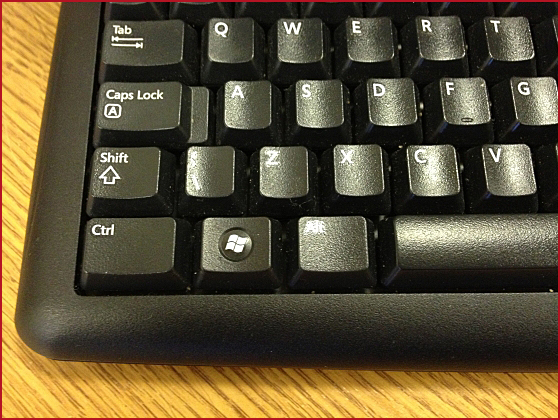 On the Dell, they are the same width as those above them: 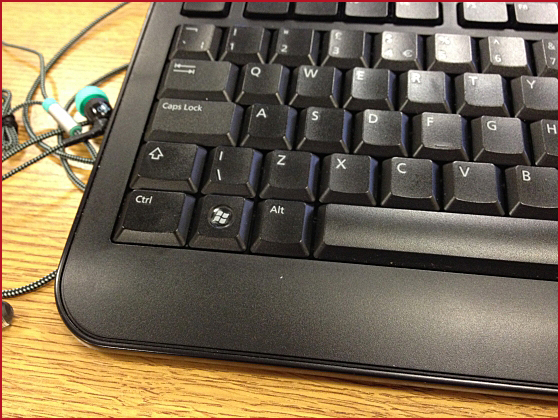 I know, what the fuck, right?!

The effect of this is that if I try to casually Alt+Tab between two windows using my left hand, I frequently press the space bar with my thumb instead of the Alt key. I cannot begin to tell you how infuriating this is. Not only do I not switch to the other window, but now I put a big bloody gap in the text I’m writing in the current window. Like this:          . It’s a nightmare!

The worst compromise they’ve made though, is that as a result of the reduced width, they’ve had to move the arrow keys.

On my colleague’s Microsoft keyboard the arrow keys sit in line with the groups of keys to the left, right and above: 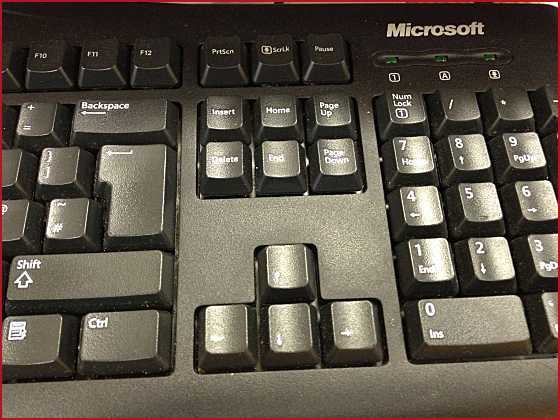 On the Dell, they have shifted them out of line. On the left of the arrow keys, this looks good: 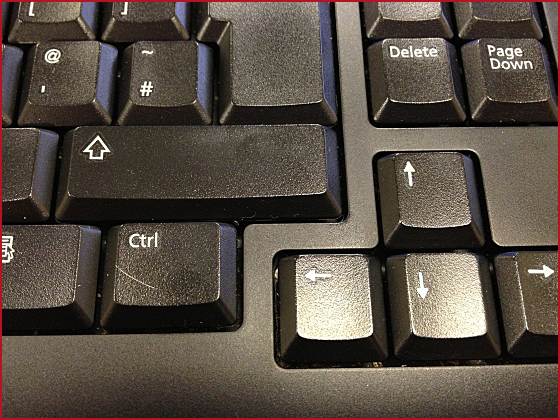 But on the right it leaves a gaping chasm: 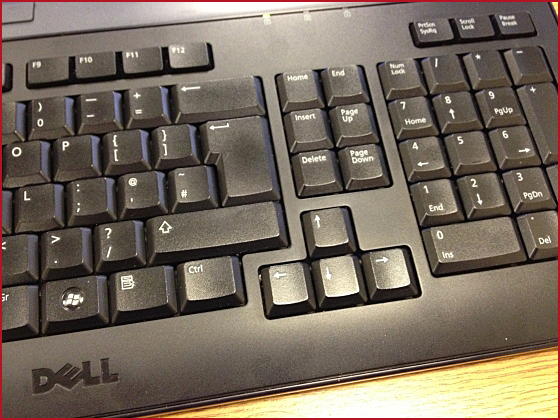 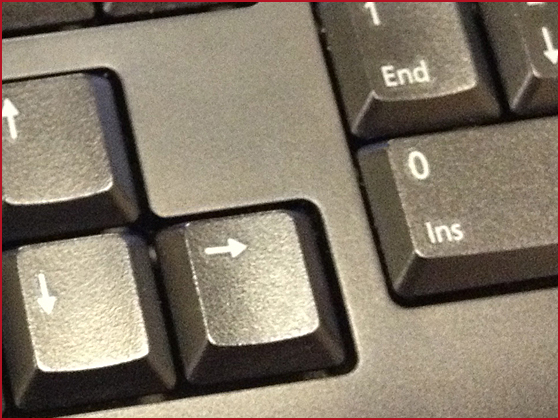 This is nothing short of an aesthetic disaster. What were they thinking?! They may as well have printed a picture of a turd on the keyboard and been done with it. Unbelievable.

The gap is large enough to fit another key onto the arrow key cluster. That key could literally be anything. It could be an extra Esc key, or a backup ] key in case the usual one broke. But no, they thought they’d leave the gap. It’s a slap in the face to the user, is what it is.

Despite this catastrophe, there are things to like about the keyboard. The keys are all shorter than on a traditional keyboard and the function keys are flat with the PrtScn / SysRq, Scroll Lock & Pause / Break keys shifted to the top right which looks fucking amazing: 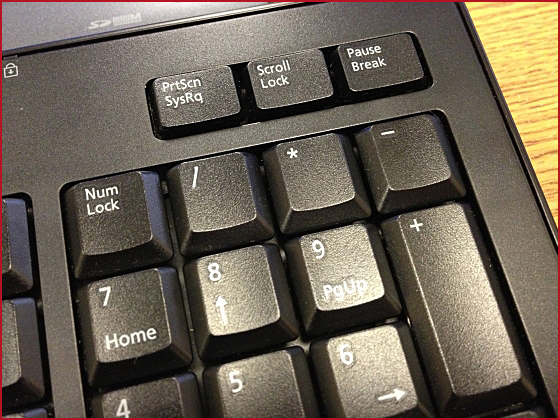 After a lot of thought I’ve decided I’m going to keep using this keyboard, not least of all because swapping it again would involve going upstairs.

After using the Kensington with its dodgy return key and wonky space bar, the Dell is functionally acceptable. But that gap by the arrow keys drives a dagger into my eye every time I glance at it. The Dell design department should hang their heads in shame.