A little while ago I made a complaint to the ASA about the terrible Reed advert. You can read that complaint here.

The ASA have now replied. It is not good news 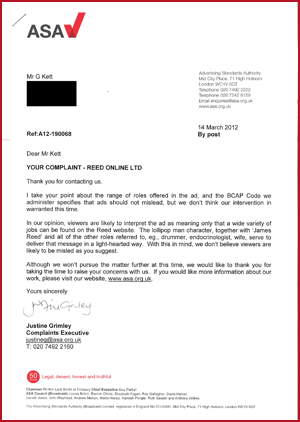 Thank you for contacting us.

I take your point about the range of roles offered in the ad, and the BCAP Code we administer specifies that ads should not mislead, but we don’t think our intervention in [sic] warranted this time.

In our opinion, viewers are likely to interpret the ad as meaning only that a wide variety of jobs can be found on the Reed website.  The lollipop man character, together with ‘James Reed’ and all of the other roles referred to, eg., drummer, endocrinologist, wife, serve to deliver that message in a light-hearted way.  With this in mind, we don’t believe viewers are likely to be misled as you suggest.

Although we won’t pursue the matter further at this time, we would like to thank you for taking the time to raise your concerns with us. If you would like more information about our work, please visit our website, www.asa.org.uk.

Another win for Big Business and a kick in the nuts to the Little Guy.

Last week I submitted a complaint to the ASA. They confirmed receipt but yesterday I saw the offending advert is still on television. This shower of bastards are failing in their remit.

This is the complaint I filed:

Where did you see/hear the advert?

On my television. It was on Comedy Central +1, about 18:45, during the break in Friends (in which the character “Joey” auditions for the part of body double (in the form of buttocks!) to Al Pacino, with hilarious consequences).

When did you see/hear the advert?

Oh sorry, I got carried away and put that information in the box above. I will try to read all of the questions before answering any in future so this faux pas shall not be repeated. Anyway, see above.

Who was the advertiser?

What was the product?

Their internet website on which you can search for job vacancies

On this advert a fat man is shown looking downcast at his desk. An apparently mentally subnormal man identifying himself as “James Reed” then bursts through the wall and informs the downcast man (and I quote), “you hate Mondays because you hate your job. You should be a lollipop man.” (This is presumptuous, but the downcast man replies “I love lollipops.” Although he does not seem to have fully grasped the concept, I believe his agreement with the statement made by “James Reed” is implied.)

“James Reed” then extends his arms and his clothes fly off to reveal a cape and shirt bearing the words “reed.co.uk”. A band wearing “Kiss” style make-up appear and they all begin singing “love Mondays”, which appears to be Reed’s advertising slogan (the implication being that having a job you enjoy will cause you to “love Mondays”.)

“James Reed” then goes around the office informing people that they should be pursuing other vocations. By pointing at them he is able to transform their clothes into outfits that match the job he has chosen for them.

As the man is called “James Reed” and his shirt features the reed.co.uk logotype, I think it is reasonable to infer the message that the Reed website would be able to assist these people in finding vacancies to match the jobs “James Reed” has shouted into their faces.

The issue arising from this is that when one searches reed.co.uk for vacancies relating to the keyword “lollipop man”, no results are returned.

I have repeated this search several times over the last three weeks with the same result, and have come to the conclusion that reed.co.uk does not feature vacancies for lollipop men (or women). I have even tried searching for the American term “crossing guard” with no luck.

This advertisement is therefore misleading. If my secret dream had been to leave my dull office job to become a lollipop man, I would feel empowered by this film and would certainly go onto reed.co.uk to find a vacancy. If I did not find one I would be very upset and angry that this deviant “James Reed” had damaged the wall behind my desk (causing an uncomfortable draught and costing my company money and inconvenience in repairs,) and zapped away my best shirt and tie to be replaced by a lollipop man uniform that I couldn’t even bloody use.

I trust that the ASA will come down hard on this company and their spokesman “James Reed,” to serve as an example to other job sites.

If they ever bother to respond, I will post it here. In the meantime, please feel free to submit your own complaint about this dreadful advert here.