I like the Twitter. It’s brilliant. It took me a long time to “get” it, but I’m glad I finally did.

Last night I had a breakdown and shouted at people about how ketchup belongs in the cupboard and anyone putting it in the fridge is a pervert. Lots of people humoured me and joined in, and it kept me amused all evening.

I have collated all the Tweets, mainly because I think Storify is brilliant and wanted to use it again. I have learned my lesson and will not attempt to embed it – instead, here’s a link.

If you don’t already follow me on the Twitter, please do so here. We’ll be best friends.

Today my hetero life partner Bobaloba and I done lots of Tweets about how I stole a Securicor van. It is the fifth funniest thing on the entire interwebs and I put all of the Tweets together in a Storify thing. (Storify, incidentally, is well good and I intend to use it again.)

In the inevitable film adaptation we foresee Vin Diesel and The Rock playing me and Bobaloba respectively. The Polish gangsters will be played by Shawn and Marlon Wayans and DJ Qualls and the Polish gang leader by Liam Neeson. Any studio executives reading this can contact me on the Twitter.

If it works, I have embedded the Storify thing here:

No, that doesn’t seem to have worked at all. Just use this link. Stupid interwebs.

I have recently become aware of some people on the Internet who I think are excellent. The first is a man called James Ward. I don’t know who he is. He may be a comedian or a writer or he may work in Waterstones. It doesn’t matter. He is my new favourite.

He is on the Twitter which is where I first encountered him having a conversation with radio presenter Geoff Lloyd. It was an excellent conversation about how Geoff had died. I liked the cut of this man’s gib, so I followed him and in doing so, navigated to his blog.

It is wonderful. It is all about boring things and, quite often, posters he has seen. I thoroughly recommend reading all of it – I’m now back to November 2010. The thought process and over-analytical approach to the mundane is very similar to how my mind works, except that Mr James Ward writes down his thought process for idiots like me to read.

I told him that I liked it on the Twitter. I’m not just saying this, have evidence: 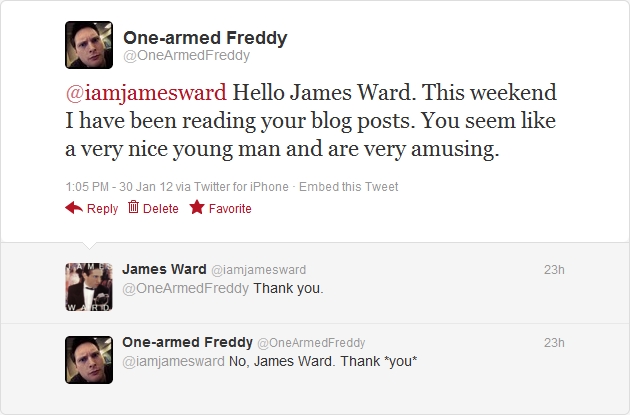 As I am incapable of original thought, I daresay I shall be drawing inspiration from his blog whilst hopefully stopping slightly short of copying his style outright.

Anyway, I don’t really have any more to say about James Ward, just go and follow him on the Twitter and read his blog.

The next thing I found which is wonderful was actually via James Ward. I know, I’m like a fucking stalker or something.

This is a blog by a man called Peter Fletcher, in which he logs all of his sneezes. Highlights include:

Trying to draw a graph (ellipse) in Mathcad

This is a level of obsession which one can only admire. One day I hope to start a project of this calibre. I have given genuine consideration to starting a Flickr photoblog of my poos. The Cons currently outweigh the Pros:

Anyway, I think that’s all I have to say about Sneezecount as well. Bye.

I work with an idiot. He is quite bigoted but due to his complete lack of self-awareness, some of the things he comes out with can be quite funny.

Do you ever have one leg of your shorts shrink after a few washes? The left leg on 3 pairs of mine has.

Indian women can look quite nice when they want to

I can deal with a bit of pubic hair but some people have fucking retarded amounts. It’s not on.

My good chums Chris & Hadyn often go into the woods together. They won’t tell anyone what they do, and nobody else is allowed to join them.

But to my astonishment and excitement, a video of them together was leaked and put on the YouTube. Here it is: